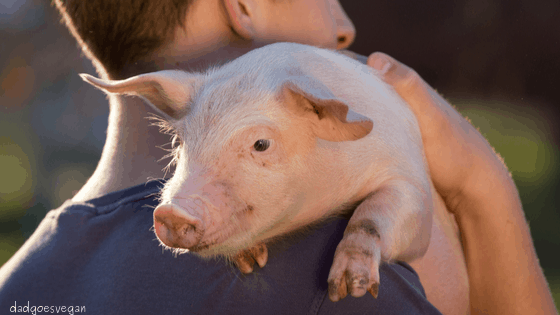 A vegan is a person who does not eat or use animal products. When I first went vegan, I didn’t know you could still eat bread. Or that you could eat dairy free ice cream that tasted like the real thing. Or you could bake without eggs and milk.

I even had a co-worker see me eat a handful of nuts and say I didn’t know nuts were vegan!

Being vegan is about being kind- to all living creatures.

Not just cats and dogs or those that we deem worthy.

There is no difference between us, a dog, a cow or a pig. We all want to live. We all have friends and families.

This was not written to attack you personally.

This was not written to make you feel horrible and like you are doing anything wrong.

This list was written for you, at this moment in time, because you are ready.

Here are the top reasons why you’re already vegan:

YOU WOULD NEVER HARM AN ANIMAL

Most of us are raised to be kind to animals.

And we want to be kind to them, we know it’s inherently wrong to kill something that doesn’t want to die.

Whether you eat Wal-Mart meat or organic, natural, free range meat from a local farmer- that “meat” came from an animal, and ALL animals raised for meat (no matter how nicely) end up at a slaughterhouse.

Please note that the linked videos are extremely graphic-

but ask yourself this–

if I can’t bear to watch them die, why am I eating them?

Video: Pigs are put into gas chambers and boiled, some while still alive.

Video: Cows are stunned with a bolt gun to the head, strung up by their legs and have their throats slashed.

Video: Chickens have their heads run through an electric current and then their throats slit.

There is no such thing as humane slaughter.

The definition of humane is having or showing compassion or benevolence.

Nothing compassionate happens in a slaughterhouse.

Most of us would never harm an animal.

Yet we choose this violence, every day, at breakfast, lunch and supper.

YOU WOULD NEVER HARM ANOTHER HUMAN

Someone had to kill the animal that is on your plate. That someone is working in a slaughterhouse and has to kill hundreds of animals a day.

Can you imagine that?

A gentle cow or baby pig nuzzling you for comfort in its last moments on earth- and you have to kill it?

Please do not underestimate the psychological toll this takes on the slaughterhouse workers.

Slaughterhouses are one of the most dangerous places to work in the U.S.

The regulations for slaughterhouses have improved but the problem is that a lot of the people working in them are illegal aliens or can barely write. Because of this, a lot of injuries go unreported.

YOU CARE ABOUT YOUR HEALTH

At least, I hope you do! Here are some facts about meat, dairy and eggs:

The reason I went vegan was for my health. The planet and the animals weren’t even on my radar. But once you open your mind to one thing, the rest follow pretty quickly.

I have never felt lighter, emotionally and physically, since going vegan.

It feels spiritually lighter to stop consuming death and pain.

YOU CARE ABOUT THE STATE OF OUR PLANET

Did you know that animal agriculture is the NUMBER ONE cause of deforestation, biodiversity loss and water pollution? It also generates 14.5% of greenhouse gas emissions which is more than all of the transportation sector combined.

It’s very hard to stay upbeat and happy when you hear these things.

The good thing is that we can collectively change the course of our future, and in fact, we already are.

You are here, reading this and that means you’re well on your way to making a positive change.

We can’t dwell on the horrors of the world but we must be aware of them so that we can change our actions and thoughts.

YOU CARE ABOUT STARVING CHILDREN

805 million people are starving in the world today.

We currently produce enough calories to feed 10-11 billion people but a lot of that goes to feed the livestock to feed us.

The amount of resources it takes to raise an animal, including feed, water and power, are very high.

Imagine taking out the ‘middleman’ (the animal) and having those resources go directly to humans.

It makes no sense that we are using so much for so little.

In fact, it probably makes you feel ill. Blood, guts, feathers, fur, raw flesh. Does that make you salivate?

It’s not the animal you are craving.

You are craving all the seasonings that accompany the dead animal. It didn’t take me long to realize that it wasn’t the beef burger that I loved- it was the toppings!

Replace the beef burger with a veggie one and you start to realize.

Look at your teeth.

Look at your hands.

We don’t have canines for ripping throats out and chewing raw meat.

We don’t have claws for slashing and killing.

We have the same teeth as chimps, monkeys, gorillas.

We have the same hands as chimps, monkeys, gorillas.

We are meant to use our hands to find fruit and peel it. To go foraging for nuts and seeds. Teeth for chewing plants.

We are very much turned off by the smell of fresh blood and guts.

But we love the smell of sweet fruit, delicious vegetables, cooked grains and fragrant spices.

IF YOU’RE A PARENT, HAVE PARENTS, HAVE FRIENDS

Nobody could imagine having their baby ripped away at birth.

Nobody could imagine being put on a “rape rack” to be forcibly impregnated.

Nobody could imagine hearing their friends screaming out as their throats were slashed, while waiting to be next with no means of escape.

Nobody could imagine living a life without fresh air or room to turn around in.

We breed animals into existence and give them a life we wouldn’t even give to the most heinous murderer’s on Earth.

We rape them, steal their children, steal their bodily secretions and kill most of them while they are still babies.

And yet, vegans are usually made out to be the crazy ones.

Is it crazy to want to stop all of this madness?

There cannot be peace in the place of such violence.

You are the reason it is happening because you paid for it to happen.

That’s one of the most amazing parts of being a human being.

And that’s why we need to keep focused on the positive even though there are a lot of horrendous things happening in our world right now.

The world needs compassionate, kind and brave human beings who are not willing to get sucked into the dark side of things,

but are willing to stand up, to become a beam of light to chase away the darkness.

When you’re ready to go vegan, check out this free vegan school! Let me know in the comments where you’re at in your journey, no judgement ❤

Looking for some awesome, easy vegan recipes to get you started?