We all love a bit of a sweet treat. There’s nothing like a burst of mouth watering fruit flavour from a sweet to wake up your taste buds and give you a sugar hit.

But should vegans be denied the sweet indulgence of a fruity sweet just because it’s almost impossible to work out what ingredients have been used in the manufacturing process?

Jolly Rancher is a US based producer of fruit based sweets that are hugely popular worldwide. They make hard candy, gummies, fruit chews, jellybeans and lollipops all bursting with sweet fruity and tangy flavours, like blue raspberry or watermelon.

Originating from Colorado and now owned by the Hershey Company, they have been making sweets since 1949, quickly becoming a firm favourite in America and now growing in popularity worldwide – they are the number 1, best selling hard candy on Amazon.

If all this has got you hankering for some fruity sweets, it’s best we get down to the nitty-gritty: are Jolly Rancher’s vegan?

In short, the answer is: it’s complicated.

It depends on two main factors:

Many people have different vegan principles which affect the choices they make about the ingredients they consider to be vegan. For example, white sugar as a product does not contain any animal ingredients.

However, the ingredient that some companies use to make sugar white is calcium carbonate which is derived from animal bones. That said, white sugar can also be made using granular activated carbon or it could be derived from coconut or beetroot so you never know.

Honey can also be quite divisive. Although bees aren’t harmed during the process of extracting honey from the hive, some people may consider the process as too invasive and cruel to the bees for them to accept honey as a vegan ingredient.

Another factor to consider is the company’s stance on veganism. For some people it is important that the company that they buy products from share their vegan principles.

For others, it simply comes down to the ingredients that the company uses in manufacturing their products.

So, it comes down to the individual: what is important to you to uphold your vegan principles?

Many companies get their ingredients from third party sources and while they can be confident that their processes are vegan and cruelty free, it may be difficult for them to be sure that the ingredients that they source from other companies share the same vegan principles.

Food colourings, if not otherwise stated, may be tested on animals so that is something that you need to consider. Furthermore, some colourings, such as Carmine, are derived from animals but these are normally stated in the ingredients.

We can assume, without being 100% sure, that due to the nature of the flavors they create, that the flavorings are derived from natural plant sources. However, it is impossible to be totally sure.

As a consumer, you need to be clear on your vegan principles before buying such products.

Let’s break it down: sweet by sweet.

In this category, we will look at all of the soft sweets and chews that Jolly Rancher produces. There is a wide range of sweets that fall into this category so read carefully.

And remember, it’s up to you what you are prepared to accept as part of your vegan diet. If you are at all unsure, do some more research until you are completely satisfied or just opt for a product that you are certain contains only the vegan ingredients you are happy with.

Jelly beans are a firm favourite, having been around for many years. The chewy fruitiness and the unique texture have made the jellybean the grandaddy of chewy sweets.

Jolly Rancher Jelly Beans are made using sugar, corn starch and corn syrup which are all vegan so no problems there. White sugar is not listed as an ingredient so you don’t have to make that call.

In most jelly beans, to get that unique chewy texture, gelatin is used which is an ingredient that all vegans avoid due to the way it is produced. Animal skin, bones and cartilage, usually from pigs, cows or fish, are boiled down to produce this protein which is added to a huge range of products that require a chewy texture.

Natural alternatives, such as Pectin are being more widely used but Jolly Rancher still use gelatin in some of their products.

But there’s no gelatin in Jolly Rancher Jelly Beans. This means that, apart from the controversial ingredients (flavourings and colourings), they are vegan and fine for you to eat.

Working out if Jolly Ranchers Gummies are vegan is slightly trickier because the ingredients change from flavour to flavour and they have such a wide range of flavours. However, most of the ingredients seem safe except for one.

Yes, the dreaded gelatin. Gummies, sadly, do contain gelatin so they are not vegan.

Jolly Rancher produces a wide range of other soft sweets that fall into the category of soft sweets and chews. The rest of the ingredients are vegan but the one ingredient that separates them is gelatin.

Below is a list of Jolly Rancher sweets and whether or not they contain gelatin so it is clear which ones are vegan and which ones aren’t. Remember, you still need to make a decision about the flavourings or colourings which Hershey cannot confirm are vegan.

The following sweets contain no gelatin so can be considered vegan depending on your stance regarding flavourings and colourings. 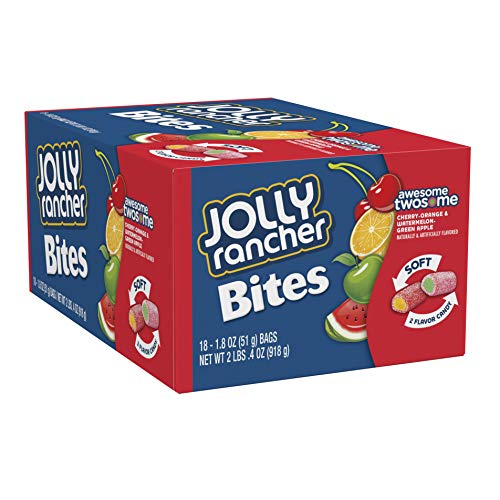 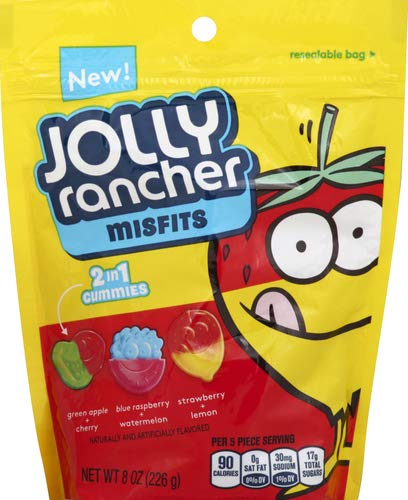 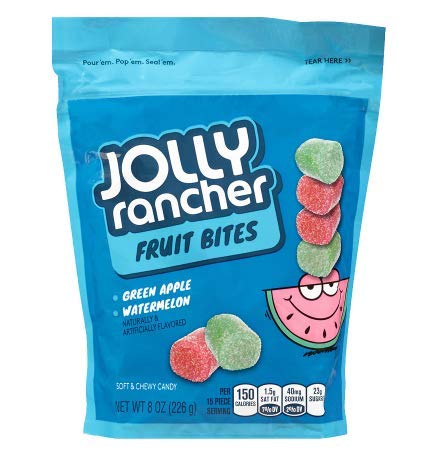 The following soft sweets by Jolly Rancher do contain gelatin so cannot be considered as vegan.

Jolly Rancher Sour Bites do not contain gelatin but they do contain lactic acid as an ingredient. Lactic acid can be derived from milk but as this is not stated in the ingredients, it depends on how strict a vegan you are.

Lollipops and hard sweets are some of the most popular sweets that Jolly Rancher produces. They are hugely popular with young and old alike and they are the top selling brand of hard sweets on Amazon.

Looking at the ingredients, Jolly Ranchers hard sweets are made using sugar, corn syrup and artificial flavours and colours. Looking more closely at the colourings used, such as Red 40, Blue 1 and Yellow 5 and 6, they are all made using natural ingredients and contain no animal products at all.

The same can be said for Jolly Rancher lollipops. The primary ingredients are just sugar, corn syrup and artificial flavourings and colourings so Jolly Rancher Lollipops are vegan. 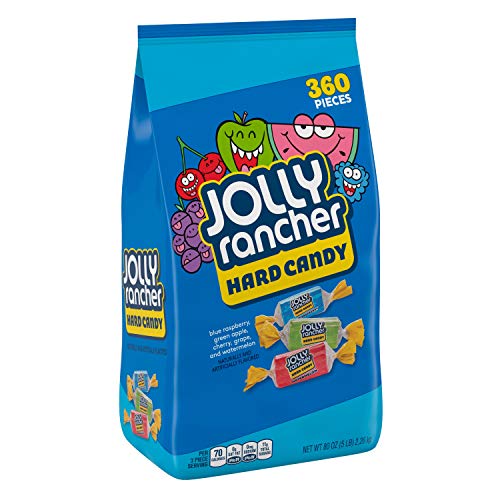 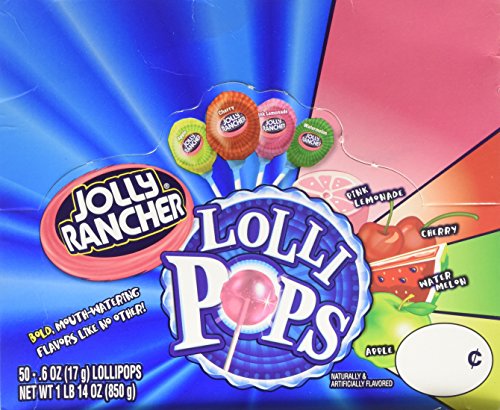 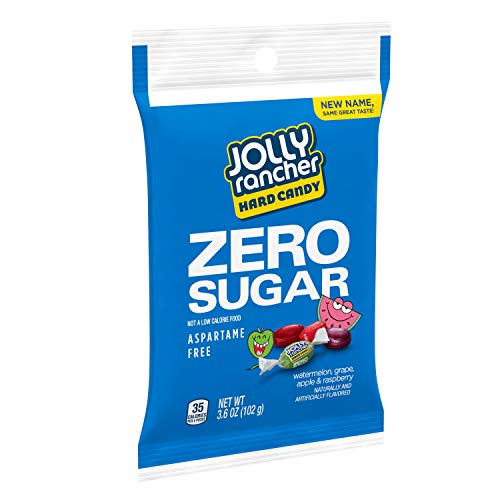 However, Jolly Rancher Filled Lollipops do contain gelatin so avoid those.

Jolly Ranchers are not officially vegan. They do not promote themselves as vegan but many of their products do not contain ingredients derived from animals so can be considered perfectly acceptable for many vegans.

It all depends on your values and principles, but if you are vegan and you crave a sweet treat, you can still enjoy something from their range of fruity, tangy and juicy sweets, confident that they have not been made using any animal ingredients.

Why are Jolly Ranchers not vegan?

There are many different reasons why people chose vegan and consequently, some vegans are more strict than others. So the question about whether or not Jolly Ranchers are vegan comes down to your personal preference and what ingredients you are prepared to accept as vegan.

While Hershey do not promote themselves as a vegan company, many of their products are made using only vegan ingredients. They use some vegan alternatives to products that can be derived from animals, such as lecithin, preferring soy based vegan lecithin.

So, depending on your stance, many Jolly Rancher products are perfectly fine if you are vegan.

While their product range is not officially classified as gluten free, there are no gluten containing ingredients used in the manufacturing of Jolly Rancher sweets.

However, as all manufacturing of Jolly Rancher takes place in Hershey factories, there is the slight chance of cross contamination so it is impossible to be 100% confident of gluten free status without official certification, which they don’t have.

Jolly Ranchers are dairy free. Some of their range do contain lactic acid, which can be derived from milk, but Jolly Rancher use an alternative which is fine for a dairy free diet.