Most vegans are aware that many of our beloved childhood sweets aren’t suitable for vegans; this was usually because many of them contained gelatine (a translucent, colourless, flavourless food ingredient, commonly derived from collagen animal body parts).

While many confectionary companies are beginning to move away from using gelatine, are any our favourite treats vegan-friendly? And if so, what about Drumstick lollies?

Swizzel’s Drumstick are a nostalgic fan-favourite of many a childhood party bag! They are a soft pink, chewy, raspberry and milk-flavoured gummed lolly.

They’re still popular today, and can be found in most supermarkets, sweet shops, and corner stores. 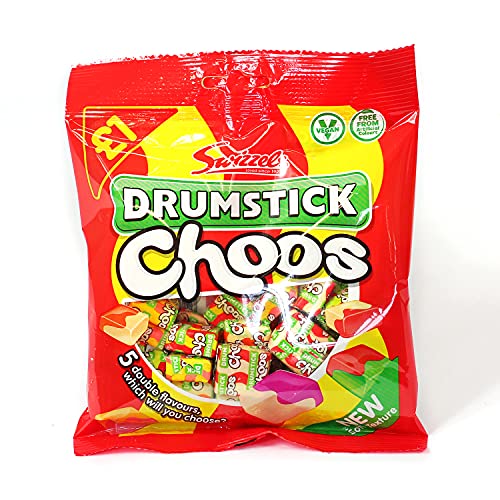 Swizzels Matlow LTD (now branded as just “Swizzels”) is a confectionery manufacturer based in Derbyshire in the United Kingdom. The company had revenues of £47 million in 2010/11.

It currently employs around 600 people.

Swizzels exports around 20 per cent of its sweets to more than 20 countries, mostly in Europe. Their highest selling brands are Love Hearts, Parma Violets, and Drumstick lollies.

Operations began in the early 1920s at a market stall in Hackney, London, with Maurice and Alfred Matlow selling jellied sweets. They then went on to build a small factory in east London in 1928 and became known as “Matlow Brothers”.

In 1933, they merged with a rival factory owner, David Dee, who specialised in fizzy compressed tablet sweets.

What is Gelatine Used in Food For?

Gelatine has many, many uses, but in regards to food, it is probably best known as a gelling agent in cooking. Different types and grades of gelatine are used in a wide range of food products.

Gelatine is also used as a stabiliser, thickener, or texturiser in foods such as yoghurt, cream cheese, and margarine.

It is also used in fat-reduced foods to simulate the texture of fattiness and to create volume. It also is used in the production of several types of Chinese soup dumplings.

The filling is made by combining ground pork with gelatine cubes, and in the process of cooking, the gelatine melts and creates a watery interior with a characteristic jelly-style stickiness.

Gelatine is a key component in jelly because it is effectively what jelly is.

Sourcing gelatine involves heavily boiling certain cartilaginous cuts of meat or bones of animals, such as pigs and cows, which results in ‘sheets’ of gelatine. These sheets feel plastic-y, and are only activated after being dissolved into water.

Depending on the concentration or amount used, the resulting liquid when combined with gelatine will form a natural and robust jelly or gel (once the liquid has cooled).

Naturally, because it is directly sourced from animals, it is not vegan.

Is There a Vegan Substitute for Gelatine?

There is. It’s called Agar Agar and it works in the same way (as a binding and thickening agent) and it contains no animal compounds.

Nutritional Value of Drumsticks (Per 100 g)

There are vegan alternatives to Drumsticks, such as:

What Sweets are Vegan in the UK?

So, unfortunately the original Swizzel’s Drumsticks aren’t suitable for vegans. This is because they contain a product called gelatine, which is cartilage from the bones of animals that is extensively boiled until it creates a hard, waif-like sheet that is then dissolved into water, and added as a thickening or gelling agent in many confectionary products.

However, while Swizzel’s Drumsticks aren’t suitable for vegans, their Drumstick Choos contain no gelatine (or any other animal by-products), and taste fairly similar to the original Drumsticks.

The UK now stocks many vegan sweet options, such as Love Hearts, Parma Violets, Fox’s Glacier Fruits, Candy Kittens, and many more (including plenty of chocolate!)

While many food companies still use gelatine in many of their products, there is a fully vegan substitute called Agar Agar, which works the same way as gelatine, but is entirely cruelty-free, so we can hope Swizzel’s opt for this ingredient over gelatine in the near future!