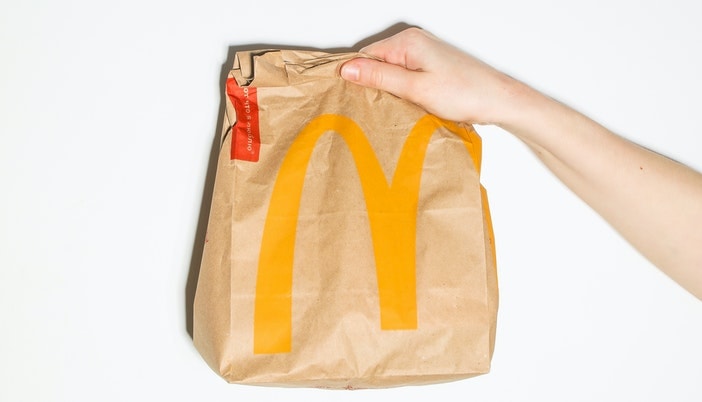 McDonald’s famous apple pie has been a popular part of the fast food chain’s legacy since the 1960s and is loved by many – but can it be enjoyed by vegans?

As with many processed food products, the answer to ‘is it vegan?’ isn’t a straightforward ‘yes’ or ‘no’, and generally depends on how strict of a vegan you are (and where in the world you are ordering the item from).

In the UK, however, technically McDonald’s apple pie is suitable for vegans because it contains no meat or dairy products within its ingredients. However, it has a disclaimer that doesn’t guarantee it is free from cross-contamination.

So, the answer is a mixture of yes and no.

What Goes into McDonalds’ Apple Pie?

The current UK ingredients of McDonald’s apple pie are as follows:

It may be confusing that while the ingredients above don’t list any meat or dairy products, McDonald’s apple pie still isn’t listed as vegan.

This is because (in the UK, at least), although McDonald’s apple pies are vegan by ingredient and are not fried alongside animal products, the oil used for the apple pies is filtered using the same device as the oil used to cook chicken and fish. Therefore, there’s a small chance of cross-contamination with meat, fish, and milk.

The same rule applies to vegetarians – it depends on how strict of a vegetarian you are.

However, if you are just avoiding having meat as a part of your diet for health reasons, treating yourself to a McDonald’s apple pie occasionally shouldn’t be a problem.

The Questionable Ethics of McDonald’s

Many vegans choose to steer clear of McDonald’s because many of the company’s ethics do not align with many vegans who are in it for moral, ethical, and sustainability reasons.

McDonald’s are famously one of the key culprits in the ongoing global deforestation crisis, which is caused by the mass production of soy feed they use to feed the cattle that is then bred for burger meat, although in recent years they have taken action to reduce their impact on the environment and the world’s rainforests.

They also cull billions of cattle and chickens every year.

What are the Vegan Options at McDonald’s?

In 2022, vegans are able to step inside any McDonald’s in the UK and order items from the menu that are completely vegan. These include:

The newly launched McPlant is the chain’s vegan version of the Big Mac.

It consists of a vegan burger made with a plant-based patty (co-developed with Beyond Meat®) featuring vegan sandwich mayo, ketchup, mustard, onion, pickles, lettuce, tomato, and a vegan cheese.

The Spicy Veggie One

The Spicy Veggie One is a wrap filled with red pesto veggie goujons with spicy relish, tomato, lettuce, and red onion

A kids or a lighter vegan meal, this wrap is made with a red pesto goujon and tomato ketchup with shredded lettuce along with a drink of your choice and fries or fruit bag.

The dippers are a blend of red pepper and sundried tomato pesto, all coated in crispy golden breadcrumbs.

A fan favourite – the French Fries are completely vegan/vegetarian friendly. However, because they are fried in oil, the same small risk of cross-contamination applies as with the apple pie.

This is the same regarding McDonald’s hash browns.

For pizza lovers, vegans can indulge in the Vegan Works from Papa John’s.

Their jackfruit “pepperoni” tastes very similar to the original, and the vegan sausage, chestnut mushrooms, green peppers, onions and olives blend perfectly with the vegan cheese and tomato sauce to bring a pizza packed full of cruelty-free flavour.

Other vegan pizzas/sides from Papa John’s include:

Released in 2019, the Vegan Sausage Roll proved a massive hit, and it showed many food companies that vegan food is very popular these days – and is still one of their best-selling items.

They also released a festive mushroom and cranberry baked slice over the festive period. Larger branches of the company are now selling vegan sandwich options too.

Though they don’t have as many vegan pizzas as Papa John’s, Domino’s do have a few vegan offerings on their menu.

Their Chick-Ain’t offering utilises soya strips in place of chicken, and if you throw on some extras (such as jalapeños and mushrooms) to go with the onions and peppers, this is a tasty treat and also a good source of vegan protein.

The Vegan Royale is the plant-based version of the company’s famous ‘Chicken Royale’. The “chicken” part of the product is created by the Vegetarian Butcher, and is a very good imitation of the original.

It comes with vegan mayo and iceberg lettuce, which replicates it well. Their fries are also vegan, of course.

Pizza Hut have been providing plant-based pizza options for a while, but recently they’ve incorporated veganism into their desserts menu with a vegan-friendly cheesecake made with vegan caramel and biscuit – and it’s delicious.

Starbucks has been a vegan-friendly establishment for a while, with almost all of their classic drinks being available as a dairy-free option (substituting cow’s milk with oat, almond, coconut, or soy milk).

The following can be veganised:

How to Make Your Own Vegan McDonald’s-Style Apple Pie

Who doesn’t love apple pie?! If you fancy a sugary treat that doesn’t run the risk of cross-contamination with any animal components, why not make your own at home? Here’s what you’ll need:

So, we have discovered that the ingredients to McDonald’s apple pie are in fact vegan, however, a disclaimer from the company states that they cannot guarantee the products aren’t susceptible to cross-contamination from the fryer oil, which may or may not be an issue to non-strict vegans.

However, many vegans avoid McDonald’s because of their contribution to mass deforestation and the culling of millions of cattle every year.

As veganism becomes more embraced within mainstream culture, more and more popular restaurants (including McDonald’s) have started adding vegan options to their menus, such as the McPlant Burger (McDonald’s), the Vegan Royal (Burger King), and many items on the Starbucks food and drink menu, including most of their popular drinks (which can be veganised).

McDonald’s apple pie has been a popular addition to the chain’s menu since the 1960s, and although it cannot be fully vegan-certified, you can make your own version at home.