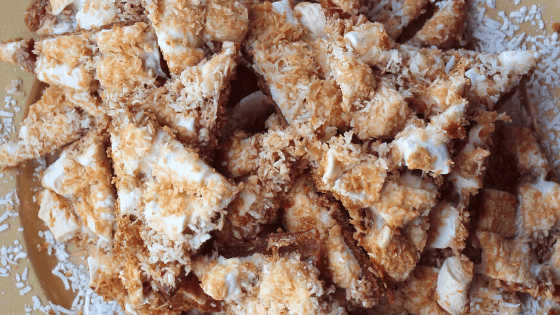 Vegan Caramel Heavenlies are made with graham wafers, caramel sauce, gooey marshmallows and toasted coconut- in other words, they’re an absolute dream. The best part? They’re super EASY to make!

My mom has been making these since the early 90’s. The ones she made were made with gelatin marshmallows but that’s an easy fix with Dandies Vegan marshmallows!

The caramel is super simple, no candy thermometer required. We have found that using vegan butter baking sticks seems to work a lot better than vegan margarine. This is because of the higher water content in margarine.

So if you can get your hands on Earth balance buttery baking sticks, that would probably be best!

How do you make vegan caramel heavenlies?

Start by laying out 12 graham cookie rectangles over the bottom of a cookie sheet covered in parchment paper. Sprinkle the mini marshmallows over the graham wafers. Place the sugar, vegan butter and corn syrup in a saucepan and heat over medium heat until the sugar is completely dissolved.

Once the sugar is dissolved, remove from the heat and stir in cinnamon and vanilla.

Spoon the caramel sauce over the marshmallows and graham wafers. Evenly sprinkle the coconut over everything.

Place in the oven for 15 minutes, until the marshmallows and coconut are nicely toasted.

The marshmallows will puff up quite a bit but will shrink as they cool.

Slide the caramel heavenlies onto a wire rack to cool.

Once cooled, cut into desired square size and then cut the square diagonally to get two triangles. Did you make these Vegan Caramel Heavenlies? Let us know how they turned out for you in the comments! Click the image below to save this recipe for later!