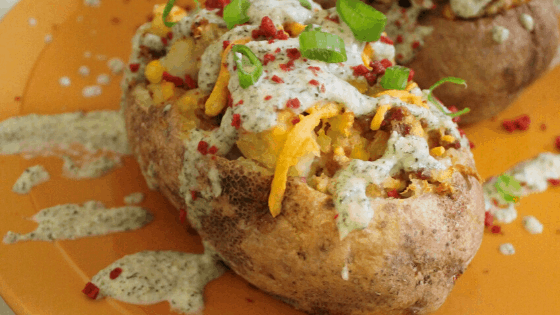 These ones have an added protein punch because of the crumbled veggie burgers. You can definitely serve these as a side dish or a main dish!

The longest part of this recipe is baking the potatoes! The rest is relatively easy and quick.

these Double Baked Potatoes are a vegan dream come true! HOW DO YOU MAKE DOUBLE BAKED POTATOES? Start by preheating your oven to 400 degrees. Then poke some holes up and down each of the potatoes with a fork so they don’t explode while baking (yeah, don’t skip this step.)

Place the potatoes directly on the middle rack and bake for roughly 1 hour or until they’re tender.

While the potatoes are baking, heat the oil in a fry pan over medium heat. Dice the onions and then saute them for 5 minutes. Crumble the veggie burgers and add the garlic to the fry pan. Saute the mixture for 5-7 more minutes on medium heat. Set the veggie burger mixture aside until the potatoes are done.

Once the potatoes are done, take them out and allow them to cool enough to be handled.

Once they’re cooled down enough, carefully cut off the top of the potato, about 1-2 cm down. With a spoon, carefully scoop out soft potato leaving a thin shell. Brush potato shells with vegan margarine or oil, place on a baking sheet and put them back in the oven while you make the mashed potatoes.

For the mashed mixture:

Add the margarine, pepper, salt, nutritional yeast, non-dairy milk and scooped out potato insides to a mixing bowl and mash to a smooth consistency. Take potato shells back out of oven, scoop the mashed mixture back into each shell so that they’re heaping full.

Add remaining vegan cheese to the top and place back in oven. Bake for ten mins and broil for five. Carefully watch while broiling so they don’t burn. The cheese should be a bit crispy on top. Once broiled and the cheese is crispy, drizzle with Dilly Ranch, sprinkle with chopped green onions and vegan bacon bits.

Feel free to use vegan sour cream in place of the dilly ranch.

Did you make these Double Baked Potatoes? Let us know how they turned out for you and click the image below to save the recipe for later!